The Spectrum Live event began for the artists on Thursday evening with a special screening of the documentary Better Things about the life and choices of artist Jeffrey Catherine Jones. This was a compelling way to start a Sci-fi/Fantasy art convention that would in the end defy all other conventions of this type.

The film maker, Maria Cabardo, is in the final phases of putting the documentary together and will be doing a kickstarter campaign to get some funding. Keep track of the project at the Macab Films site. Jeffrey Catherine Jones transcended this material plane of existence last May.

Friday morning we headed over to the Bartle Hall at the Kansas City Convention Center to set up our booth and prepare for the 4pm opening. This year we decided to showcase our work on one large table in a corner booth with fabric draped on each wall. All and all we were happy with the outcome.

The most popular natural perfume at Spectrum Live appeared to be Terrestre with Blanc and GreenWitch tied for second. It’s always fascinating how each event will have specific fragrance favorites. My honey bee print was also a popular item. 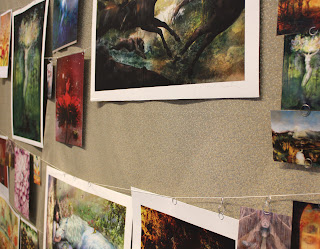 Besides patrons, Greg had lots of fans asking for autographs of books he’s illustrated, pages from Spectrum, Magic Cards, etc. The most amazing fan was one who brought a box with fifteen different books with Greg’s illustrated covers photo below. 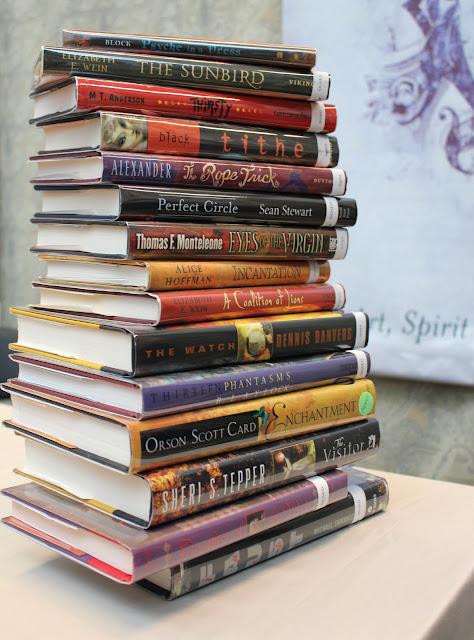 We saw lots and lots of our friends, including a few that we haven’t seen in years, like illustrator Anita Kunz, pictured below sandwiched between Greg and I.

Along with the art show on the main floor there were presentations and portfolio reviews on both Saturday and Sunday. Production/concept designer Ian McCraig was a big draw at the event with three separate very well attended talks. On Saturday Greg moderated an Artist As Brand panel with artists Michal Whelan, Donato Giancola, Virginie Robars and William Stout.

We also made new friends like Virginie Robars from Brittany France who makes the most exquisite dolls. She won a gold medal for Jack.

Each night, after the show the artists gathered for various activities. On Friday everyone assembled on the 16th floor of Aladdin for a drawing fest with live models. Saturday night was the Spectrum Fantasy Art Annual awards ceremony at a spectacular 1920’s theater called the Midland. it was an award show like no other in the illustration industry. Greg was the presenter for the “Institutional” category.

By the end of the event on Sunday Arnie and Cathy seemed open to the idea of organizing a second Spectrum Live for next year.